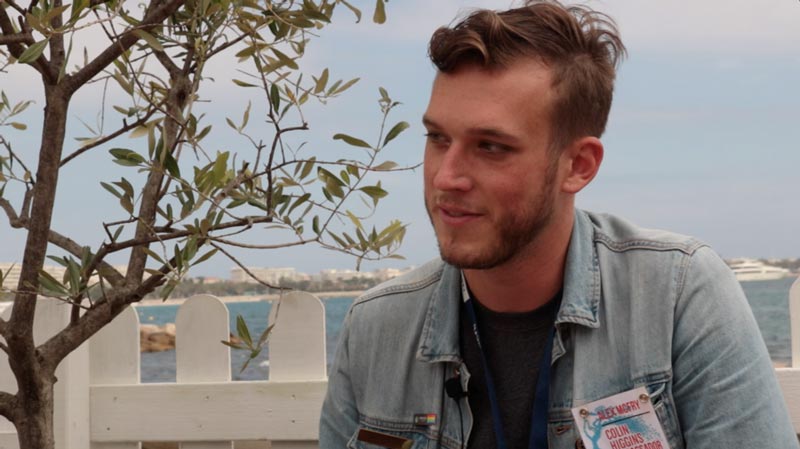 Alex McFry is a student alum of the American Pavilion’s student intern program and a film graduate of the Florida State University. In this segment, we’ll be detailing our previous interview with the longtime alum in anticipation of our upcoming videos.

How did you get into the American Pavilion?

It was kind of a happy accident. I was filling out the application because some of my upperclassmen had gone last year and I saw some of their stuff and it looked really fun. So I was filling everything out and I didn’t finish because the program is a little pricy. Out of my price range at least. Grad school means a lot of loans. Then they sent out an email that said, “Hi, are you in financial need, do you need assistance and are you a member of the LGBTQ community?” And I was like, “I’m super poor and gay, hello?”

And so, I emailed them back and they were like, “We’re doing this thing through the Collin Higgins Foundation.” They’ve been trying to help LGBTQ youth, mainly high schoolers going into college who need assistance, and this is the first time that they were going to do a trial run sending people who were in college to The American Pavilion. I found out after an interview with Michael Bremer that they chose me and one other person. So they covered all the expenses except for travel and my university covered that, graciously, which is super nice. And that’s how I’m here!

Tell us more about your work here. What do you do?

They put us all in different places, either inside the Pavilion or outside of it, and because I was a Starbucks barista for about five years, when they told me there was a restaurant and coffee bar I was like, “I would love to be at the coffee bar!”

There’s been lots and lots of people that come up for coffee because that’s what everyone wants, so I get to interact with people that way, and talk about why I’m here, talk about why they’re here, and I think that connection-wise it’s been the greatest thing. Because this is where everybody comes to just you know, get away from everything. It’s not so business formal. It’s been really nice.

The shifts are about 3 hours; we split it with a couple other people. And then once we’re done we’re free to do whatever we want. So we can go around to the Marche, the Palais, we can go to the screenings, we’ve been to a couple of the red carpet things, which has been fun, networking with people, and stuff like that. And in addition to that, I have a short film that I submitted to the Emerging Filmmaker Showcase. It’s called Heads Up, and I made it last summer, the last film that I directed before I went into producing.

So what’s been your biggest takeaway so far?

Being in the program that I was in, you’re sort of in this bubble, and that’s good so that you can be in your own craft, but then you forget that the real world is right outside those doors. This has been a really eye-opening experience as far as the real world is right here. It’s really great this whole time has been an invaluable batch of lessons all kind of tied up in one where it’s just kind of like the interactions with the people that I’ve had, going out and just talking and networking and knowing that it’s about getting yourself out there, so that when you’re out there you’re ready to roll and ready to go. It’s been kind of a wake-up call, I think, for what’s to come.