We Write. We Film. We Flash. We Stream.
CAMBODIA IS BEYOND THE WAR: AN INTERVIEW WITH LOMORPICH RITHY Hinly Wong - May 23, 2019 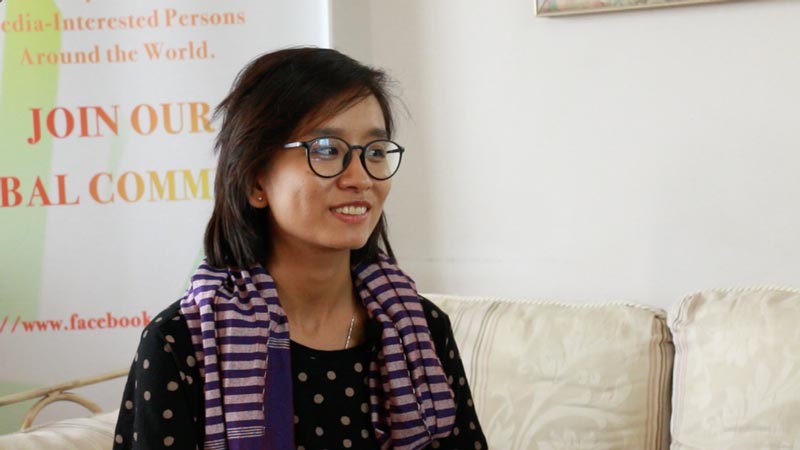 Often, when people think about the Kingdom of Cambodia, the Khmer Rouge war is one of the first things on their minds. There is no doubt that the war has cast a heavy shadow over the Southeast Asian country, but now it’s 2019. Now is the time for Cambodia to step out of the shadow of the war and show the world what modern Cambodia is all about. Lomorpich Rithy, a young Cambodian filmmaker, entrepreneur and festival director of the Bonn Phum village festival, has made it her mission to bring the artists of Cambodia into the spotlight and share their work and culture with the rest of the world. This year at Cannes, we sat down in a lovely apartment space to discuss the Cambodian arts and RIthy’s own personal journey as an artist.

Rithy has always wanted to come to Cannes, ever since her filmmaking career bloomed. After graduating from the Royal University of Phnom Penh’s Department of Media and Communication, she participated in a filmmaking study program in Thailand on a scholarship. Then, following a further two years working for BBC Media Action as a writer and director, her passion for storytelling on screen began to take off. Just last year, she completed her first feature film, Young Love, to be screened in the fall of 2019.

The Cambodian film industry is still rather small, only having started growing in the past 3 to 4 years, with very few breakout productions. The most noteworthy Cambodian film in past years was Rithy Panh’s The Missing Picture, which was nominated for an Oscar in 2014. “We also had The Diamond Islands coming to Cannes,” Rithy added. “There’s definitely a kind of movement in the film industry in Cambodia. And that’s why a lot of young filmmakers are like, “I can do it too.””

These recent breakouts have not only play a pivotal role in encouraging Cambodians to watch more cinematic releases, but have also inspired a lot of potential artists and storytellers to pursue their craft, which is often thrown to the wayside in favor of careers that are better-paying and more stable. “Because in Cambodia we don’t really have a formal film school, so it’s a bit challenging for us to feel like, “okay, maybe I want to be a filmmaker; I want it to be my career – becoming a filmmaker, a producer, or anyone working in the film industry.””

“Everybody knows that we have been in the war – the Khmer Rouge – for many years. And we’ve been steadily rebuilding the country after the war, but that is not what’s unique about Cambodia,” Rithy explained. “We have culture. We have lots of stories to tell. And also I think the world needs to hear from Cambodia more, in terms of the stories of the people […] It’s always important to see something different from your own [country].”

Indeed, Cambodia is a country that is rich in culture and history. The people’s lives are enshrouded in religion, lifestyle, singing and dance. The arts are an integral aspect of Cambodia’s culture, and they are also integral to the preservation of its culture in the face of rapid modernization.

Rithy founded and directs the Bonn Phum in order to cultivate an appreciation for the arts in Cambodian youth. She, wanted to establish a place for younger artists and storytellers to connect and share their ideas with each other. “This year we got 200,000 people in three days,” she said about the festival. “People can see performing arts, exhibitions, meet with strangers, play traditional games and have food.”

It’s important for the Cambodian people to embrace the arts, whether it be performing, music or the visual arts. However, while Cambodians need to do their part to bring their cultural identities to the forefront, it is also important for the world to understand that there is more to Cambodia than the scars of a war long past. Cambodia is here in the world, and it is voices like RIthy’s that continue to push it into the spotlight as a kingdom of rich, unique stories just waiting to be told.

VIEW NEXT
An Interview With Madeleine Ekeblad