Robert Eggers’ The Lighthouse is the kind of film that swallows you whole. It begins beneath a pitch-black screen, as Mark Korven’s sinister score swells around the sound of the lighthouse beacon reverberating across the water. The first images, in grainy black-and-white boxed into a claustrophobic Academy aspect ratio, burst on screen with brutal force. Even sitting in a cozy cinema for my late-night showing, I could feel the sea spray. 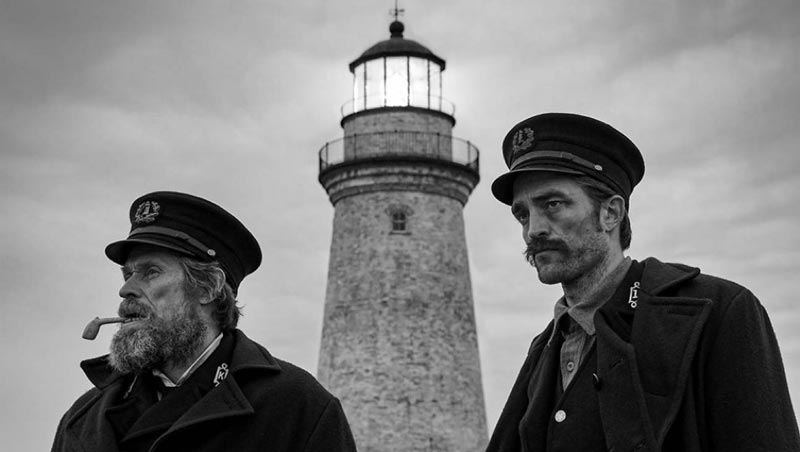 With his sophomore feature, The Witch director takes us to a remote rocky island off the coast of early 20th-century Maine. Eggers wastes no time in trapping us in close quarters with grizzled lighthouse keeper Thomas Wake (Willem Dafoe) and his reticent new assistant Ephraim Winslow (Robert Pattinson). While Wake tends to the lamp, Winslow is tasked with maintaining the lighthouse for a four-week stretch - a near-futile task as both the structure and island itself seem intent on crumbling into the sea. Wake, who farts openly and recites long-winded sea ballads over mugs of gin, quickly becomes the number-one nuisance in Winslow’s daily life. The two bicker constantly over chores and cooking as the deafening blare of the lighthouse beacon punctuates the howling wind. A vindictive seagull intent on blocking Ephraim’s path at every turn only makes matters worse.

Obscured by a bushy beard and thick pirate-like accent, Dafoe is a delight. His delivery of Wake is a pitch-perfect caricature of every gruff fictional seaman, prompting Winslow to accuse him of being a “parody” during a particularly heated outburst. Pattinson’s kinetic performance pairs beautifully with Dafoe’s. When a storm hits and strands them with limited resources, the two form a darkly hilarious bond over endless bottles of liquor and loud renditions of sea shanties. Eggers sends the pair on a steady spiral into insanity, beginning with the over-the-top murder of the infamous seagull (perpetrated, naturally, by an engraged Winslow). As his feverish imagination begins to overtake his mind, Winslow loses his grip on reality and is plunged further into the murky depths of madness.

Watching Wake and Winslow squabble as their surroundings grow more perilous is pure joy. Louise Ford’s masterful editing renders their deteriorating state of mind a jarring, choppy spin-out into the void. The deep contrast and minimal camera movement from cinematographer Jarin Blaschke form a tiny window into a bleak and terrifying world that we cannot unsee. The Lighthouse stands alongside other psychological thrillers where the true horror is isolation - think The Shining, but with fewer people and more mermaids. Eggers has once again demonstrated a knack for doling out creeping dread and horror-house thrills in equal measure. See The Lighthouse at night, if you can, and drown in its dismal depths.

The Lighthouse premiered as part of the Director’s Fortnight at Cannes 2019. It will be released by A24.