We Write. We Film. We Flash. We Stream.
PUTTING A SMALL FILM CREW TOGETHER: A BASIC GUIDE Hinly Wong - June 4, 2019

For young filmmakers, budget can be an issue, which means a lot of the time, they can only afford a small crew. A skeleton crew made up of the basic core elements of a working film crew. So, one might ask, what are the essentials for a skeleton crew? Below are the twelve people you’ll need for a functional skeleton crew: 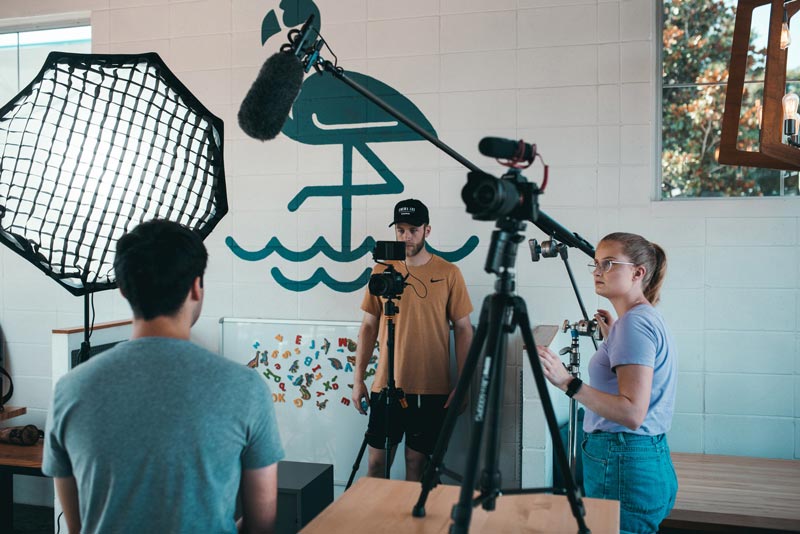 Director – Manages the artistic direction of the shoot.

Producer – With some help, organizes and schedules locations, crew and equipment. They are also responsible for making sure no equipment gets damaged or lost.

Sound engineer – Operates the microphone and the sound recording equipment.

Lighting technician / Gaffer – Works with the DoP and handles electrical and rigging matters.

Makeup/Hair – Preparing makeup and hair for the actors.

Now that you have a basic checklist, it’s time to get out there and start looking for people!

Or, you could start looking within.

Networking is incredibly important when it comes to helping your career take off, regardless if you’re working in film or not. There are plenty of people you might know who could be a great asset to your film crew, especially if you have friends in the industry. Working with people you know personally can be a boon, as working together well is something that is necessary if you want production to go smoothly. And if you don’t have any contacts? Put yourself out there! Go to a networking event, talk to people, see if anyone might be interested in working with you, or if they might have recommendations for you! The possibilities are endless.

Hey, I just met you. And this is crazy, but here’s my number. So call me maybe?

However, it’s also important to remain careful when it comes to approaching complete strangers or people you’ve just met. People with their own personal equipment are usually professionals who are high in demand. It’s their livelihood, so your film project’s pitch must be rock-solid and be of merit to them. Furthermore, it’s important that you not outright ask newly networked people for favors. Build up that relationship, communicate, then when you feel you’ve built up a decent repertoire, seize the chance.

Consider looking into potential crew members’ backgrounds as well. Request or look up their portfolios to get a feel for their skillset and expertise in a way that you can’t by simply interacting with them in person. It also helps to build up a hypothetical team in your head and make a mental note of what kinds of people would work best to create the film that you want to make. That way, it helps you have a rough direction in the types of people you scout for and makes the overall search much easier.

Now that you know the what and the how of finding a crew, you obviously need to learn about the where. I’ve already mentioned networking events like conventions or mixers, as well as your own social circles, but if you’re looking to hire people outside your network, I recommend looking up various film communities such as, wink-wink, 72 Dragons, which is a pretty good option if I do say so myself. Another option you could try is looking at different colleges or universities with film-related programs that might have up-and-coming talent that could be potential key players in your future crew.

Having said that, putting together a film crew, big or small, is a delicate process that requires both patience and vision. Each case is unique, and this guide doesn’t cover every one of them, but hopefully by reading this you have some idea of how to get started.